Jasná páka, later known as Hudba Praha, was not exactly a funk or soul group. In fact, not at all except for a few traces of reggae at times. But in the eighties they were one of my favorite Czech new wave groups nonetheless, thus I was actually quite pleased when I’ve heard they still occasionally perform these days. One of these occasions was the public vernissage of the exhibition Nová vlna se starým obsahem (“The New Wave with an old content”) which took place last Wednesday at the Popmuseum Prague. Coincidentally I just arrived in Prague the very same day, so I’ve only dropped my luggage at our flat and headed over to the Břevnov quarter to attend the gig (as well as to meet fellow researchers from Popmuseum, of course).
Pal vocuď hajzle (Fuck Off You Bugger) was one of their biggest (underground) hits from the early 1980s and likely one of the causes for their later ban. Michal Ambrož, the guy with the “blue” head and a Telecaster guitar, and the drummer David Koller are the original members. I’m not sure about the lead guitar player, I’ve forgot to ask about him. The original bass player Ivan Wünsch passed away in 1999 though. A special note deserves the special guest of the group, former member of the cult band Z kopce from Brno, Petr Váša. He’s the guy with the red T-shirt and long curly hair (no, it’s not a fancy wig…)

Jasná páka live at the Popmuseum on March 26, 2008 (photo/movie © loukash.com)
Technical note: For the first time on Funky Czech-In I’m presenting video content here. No low-res YouTube “flish-flash” though, but more the real thing, albeit recorded only with my tiny photo camera. If you can’t see it, get the latest QuickTime.
Regarding the topic “Czech New Wave in the eighties” in general, you might also want to check out my Pražský výběr article from January 2008 for some more background info. 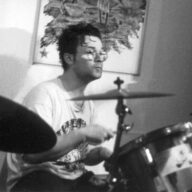